Below is the story of Grandpa-Miller’s Anvil, now residing at my house in Clarksville…. It is a great anvil but an even better story.

I have been shopping for an anvil since last December. Turns out they are very fashionable, collectible, and extremely expensive. When you do find them they are often abused chipped, rounded, or misshapen… and still expensive…

HG Miller Excavation in Montgomery county has gone out of business. Kenny Miller Jr is retiring and hired Gregory’s Auctions to liquidate his job-lot full of tractors, skid-loaders, dozers, trailers, tools, gators, and quads, along with a lifetime of assundry job site leftovers.  Tempted by gators and quads Colby and I and went to the sale. While none were listed, I knew this would be ideal, “Anvil habitat.”

Arriving early, we wandered through inspecting the  whole place. Logging interests we did not find any must-bid items. The gators and quads were hard used and broken. The heavy-equipment was…. very heavy.  There was no sign of forge gear.  Still, thinking that a broken quad could be tempting we stayed.

Late in the auction one auctioneer split off into a tall grass meadow full of neglected iron and stone.  We followed him. I won some tractor weights (anvil like objects), and an oaken barrel nestled in tall grass. A fellow bidder walked through the swampy snake-grass to the barrel, and proclaimed, “There is an anvil under this barrel”  A gasp rippled through the crowd and bidding ensued.  5 minutes later I was the winner of a pristine, but nameless 220 pound anvil looking like a prehistoric fossil, half buried in mud and surrounded by wasps and biting ants.

Colby helped me pick  anvil & barrel and off we went.

Walking out there was a conversational buzz asking, “who got the anvil.” About that same time Mr Miller walked past me muttering how the fields were not safe and not included in the sale.  I introduced myself to him as the anvil buyer.  Mr. Miller then told me how the anvil was worth hundreds and had belonged to his grandfather.  I told him its worth ~$600, but was destined for my black smith shop (not resale).  I also told him I would be willing to reverse the sale and let him keep is grandad’s anvil, but that I would be sad to do so.  Something must have charmed him and he implored and then insisted I put it in service in my shop.  This I have now done.

The next day, Colby and I returned to collect additional items, and I presented Mr. Miller with the first spoon I ever forged as thanks and memorabilia to the sharing of his grandpa’s anvil.  He appeared quite pleased, and a little incredulous. The whole experience is a great example of stars aligning in positive ways.

• Were I not in the HoCo wood worker’s guild I would not be serving the RR museum,

• If not recent floods, I may have forgotten their interest in barrels.

• Had I not bid on the barrel we would not have found the anvil.

• Were we less open the owner may have gone away bitter.

• Had the anvil been picked for the primary auction there would have been a hundred bidders instead of three (Anvil$ are fa$hionable).

In a very spiritual sense it appears that all of this was meant to be, and that in some sense grandpa-Miller’s Anvil found me (Ala Excalibur). Maybe some day it will be known again, but this time as Grandpa-Knoll’s anvil.

Note: My quest continues for a coal-forge-table, hand-crank blower, and block swage.  Any additional anvils would be given to the Blacksmith’s Guild or similar parties…. 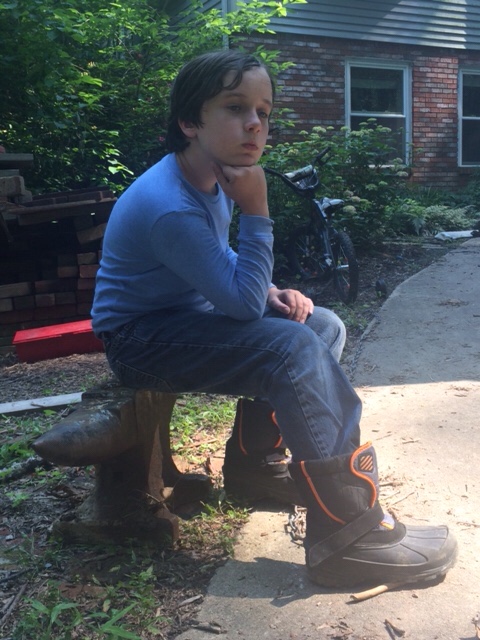 Select a WP Edit Snidget below to add it to your post or page. Yes, they can be used in content areas too!